During the phase of re-organisation, NICA is closed between January and March 2021
the ALPHABET screenings

CologneOFF was founded 2005 by Wilfried Agricola de Cologne as the first festival decicated solely to “art & moving images”. One might speak of a global festival, because it is a festival without a static...
read more "About"

CologneOFF was founded 2005 by Wilfried Agricola de Cologne as the first festival decicated solely to “art & moving images”. One might speak of a global festival, because it is a festival without a static...
read more "International Festival Platform"

ALPAHABET – is representing the screening platform of – The New Museum of Networked Art. From January 2021 on, ALPHABET will present an unique and exclusive program of audio-visual art, not only video, but also sonic art @ the new soundspace – and interactive art. 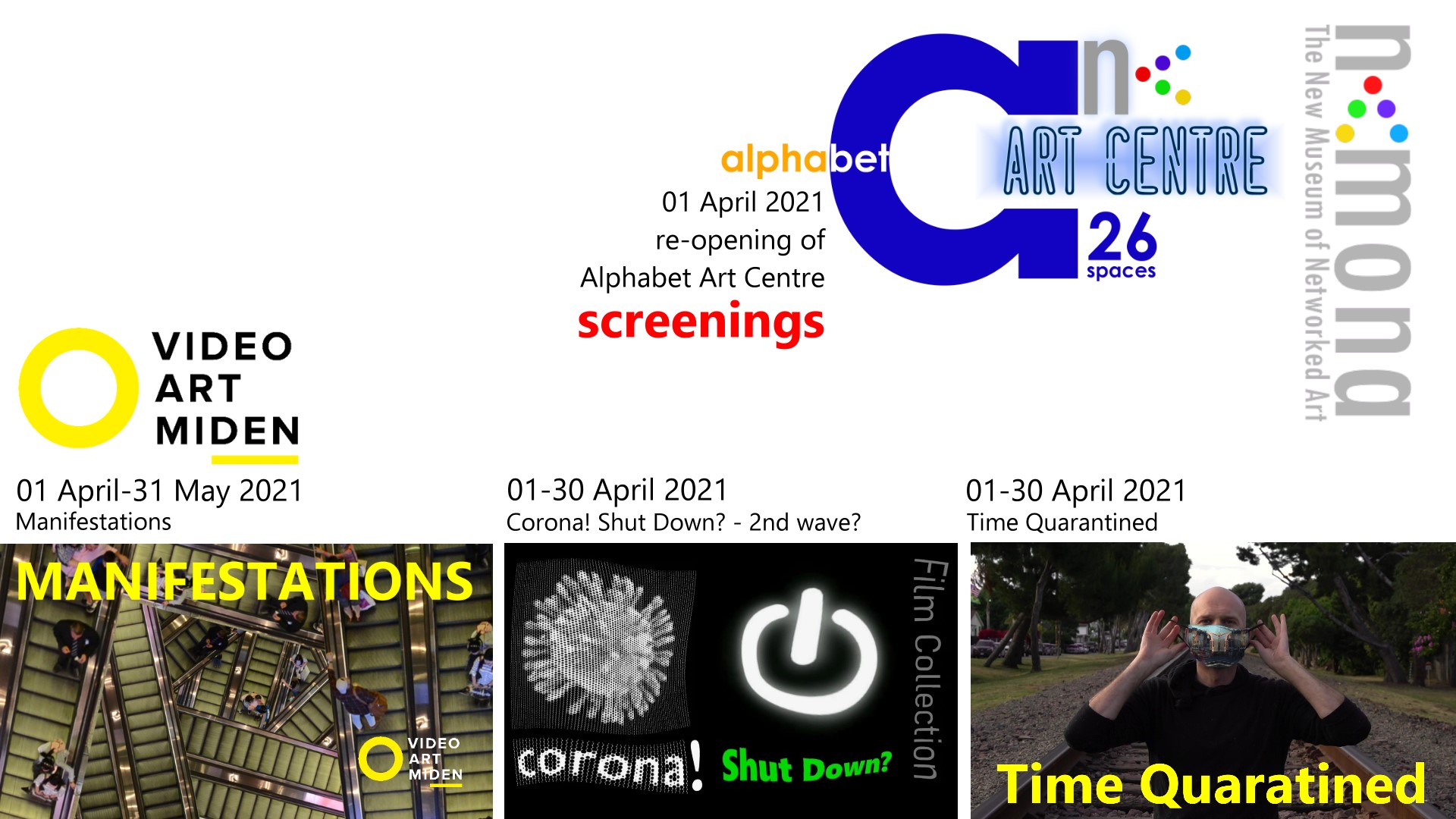 is the new name of Cinematheque @ Le Musèe di-vistioniste, launched in 2001 as a forum for streaming media at a time when streaming media in the actual sense did not exist, yet, because the technological conditions, for instance, broad bandwith Internet did not exist, yet. At that time, only FLASH & Shockwave by Macromedia, the famous vector based multimedia software allowed low bandwidth streaming, but meanwhile the technology is obsolete and since some time “Cinematheque” was out of date.

Cinematheque realized until 2010 numerous projects developed in FLASH, which were available for the users until 2015, when the entire project context of The New Museum of Networked Art was re-structured – but streaming media had become usual meanwhile due to new technologies, so that the actual concept of “Cinematheque” was obsolete, as well.
Only in 2020, “Cinematheque” got a new relevance during the Corona pandemic, when suddenly all cultural institutions which had refused to go online before, saw their future in realising their projects in virtual space.

ALPHABET will promote the already existing and future film collections of The New Museum of Networked Art in the public space of the Internet via curated programs, individual filmic works and their creators, as well as in an excange between virtual and physical space via networking partners.

Until 31 December 2020, ALPHABET will serve as the cinema space for NewMediaFest2020, afterwards act as the independent event structure of The New Museum of Networked Art.

The New Museum of Networked Art , also named “Le Musee di-visioniste
is the manifestation or visualization of an Utopia, the Utopia of Agricola de Cologne. Thus the basis is representing an artistic, respectively philosophical concept, which cannot compared with anything else.

What or Who is Agricola de Cologne and what is his Utopia?

This “networking” is not only related to a wide range of artistic projects depending on each other using the Internet and releated communicating technologies, but also the result of its creating and establishing networks on different levels via curating, a new and very personal kind of artistic expression practiced by Agricola de Cologne during the past 15 years. networking as artworking.

The Utopia in establishing “le Musee di-visioniste” as such a networked art project was, that when the artist initiated the idea of such a museum, the contents for building a museum collection did not exist, yet. It was even like that, that nobody, and at least the artist himself, knew, what would become out of “Agricola de Cologne”, at all, and how the work of the virtual instance would actually look like. Any definition used these days is based on a retrospective view, this is good for the virtual artist, curator, designer of culture, programmer, festival director and all those other functions normally whole institutional teams are working on. But Agricola de Cologne was and is combining all in one person. Agricola de Cologne is representing a network of itsown – he is the network.

It was also not like that, that the “museum” was constructed intentionally in a usual process of building the home for existing and yet to establish collections, but the idea of the “museum” was accompanying the artist while he was establishing himself as such, and only by doing, the utopean idea of the unknown museum took slowly shape. 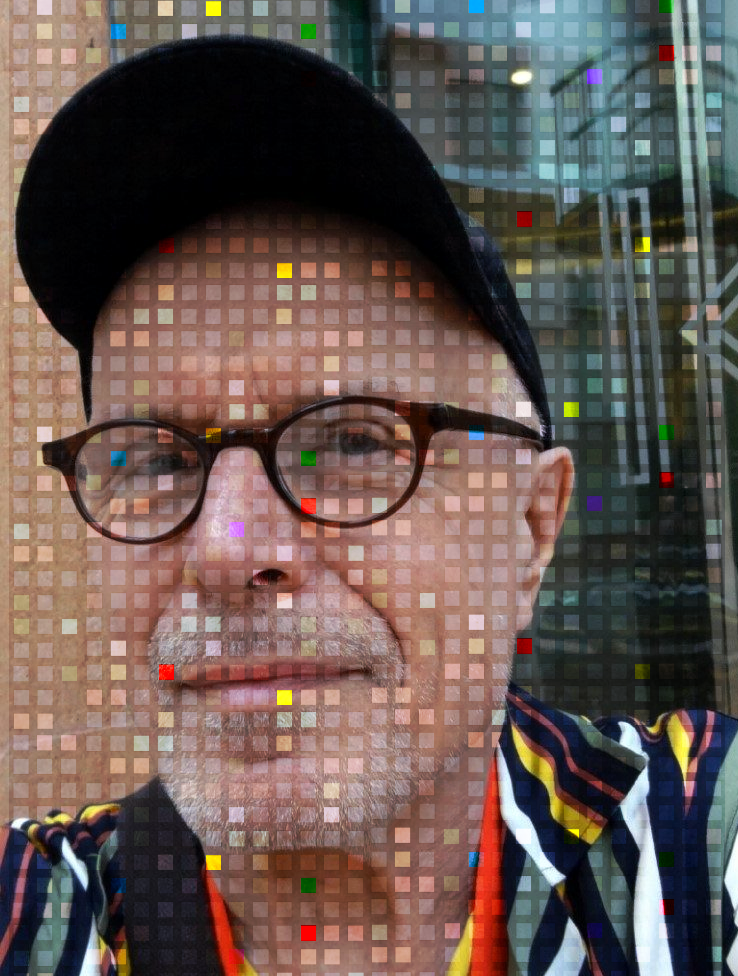 Born on 1 January 2000 and starting from point zero, materially and immaterially, it was his chance, after the artist had lost his memory completely temporarily caused by a coma, which is described in detail at another place, to write his own history and memory completely free from ancient conventions, and re-collect memory of a lost (firstly unknown and later re-known) Past simultaneously, and establish and re-establish identity. Thus, there are good reasons, why “memory & identity” became the artist’s “credo” in anything he was doing since 2000, and a basic condition for the museum project.

Thus, the “utopean” idea was not based on an intellectual concept prepared in advance, but the unknown to come, and this is good even nowadays after many aspects of the Unknown, which was only unknown at the time when it was unknown, got a concret shape during the past 15 years, so that only today actually, it is allowed to speak of a real museum, “le Musee di-visioniste” is representing according to its progressing concept.

The idea of the divisionsm was not unkown to the artist, this became evident via the shadows of the Past. In his former artistic life before 2000, he had become aware of the analytical character of his personality. In an artistic sense, this manifested itself in a kind of creating conventional paintings by using traditional art media in most unconventional ways. In project phases when he was using “watercolour” 1980-1984 and “pastel” 1984-1988, he executed paintings according to the divisionsitic principle of the Pointillist artists of the 19th century, whereby the actual painting was not the individual art work which was consisting, as such, of countless colour dots which only formed the unity of the image in the eye of the spectator, but it was already at that time a virtual painting consisting of all art works executed during a certain working phase. These individual works executed during the project phase were actually the colour dots the virtual picture was consisting of.

The same analytical character was manifesting itself in his memorial project “A Living Memorial”, realised between 1993 and 1998 and its physical manifestations 1995-1998, when he designed a mobile memorial to be presented at the same time at different places for a temporarily limited period of time.

So, the idea of “le Musee di-visioniste” to form a virtual sculpture consisting of a wide range of layers of perception does actually not represent anything new because it was always present and the condition for being creative as an artist, but rather a kind visuaization of the genetic condition to deal with art in a completely new way. The artist became only aware of these characteristics after he had lost his entire memory and he started to establish a new person and re-establish its shadows of the Past after 2000, a process which is lasting until these days.

The project of “le Musee di-visioniste” can be considered as a kind of “life” project, a manifestation of the genetic tendency to face always the encompassing whole, instead of parts of it. It is the nature of that kind of perception, that the dimension of the all encompassing whole is never known, but only parts of it. The individual art works included in this encompassing whole, get their real meaning in the context of the whole, one might also speak of a “Gesamtkunstwerk”, whereby the artist himself is not representing the “Gesamtkunstwerk” as such, but he is just a part of the whole, even he is the main condition for the existing of the whole which he is a part of it. So, The “Gesamtkunstwerk” will become only visible after the artist finished his life conceptually or physically.

The project “le Musee di-visioniste” is not based on a utopean idea, but it is an Utopia itself, as well as “Agricola de Cologne” is representing “an”, respectively “the” “UTOPIA”.